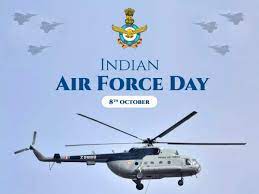 Indian Air Force Day is celebrated on October 8 every year.