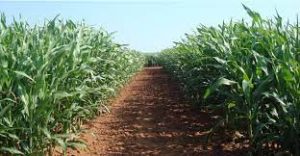 A new study has found that converting annual crops to perennial bioenergy crops can induce a cooling effect on the areas where they are cultivated.