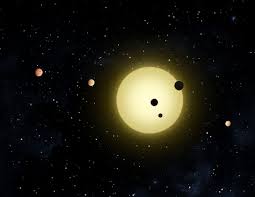 In a new study, scientists have detected barium in the upper atmosphere of two giant exoplanets for the first time.