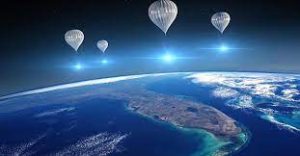 The US has planned to transmit the Internet to the people in Cuba via high-altitude balloons when their government has blocked access.