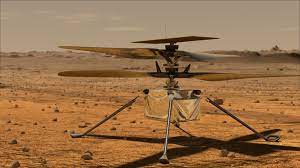 NASA announced that Ingenuity had performed its first flight of an aircraft on another planet.