What Are Humanitarian Corridors? 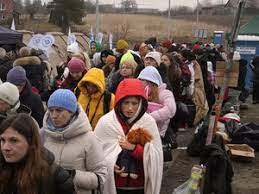 The United Nations considers humanitarian corridors to be one of several possible forms of a temporary pause of armed conflict.