What Are Integrated Theatre Commands? 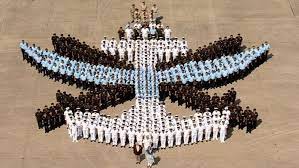 A table-top war-gaming exercise was held recently among the three services of the armed forces (Navy, Army and Airforce).