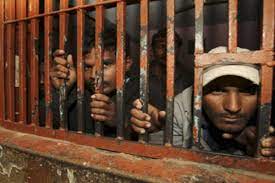 The Indian President has raised the issue of the plight of a large number of undertrials holed up in the prisons.