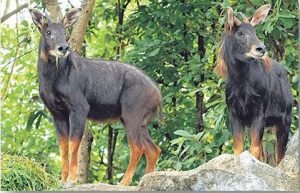 Himalayan serow was spotted in the Manas Tiger Reserve in Assam. It was spotted close to the border with Bhutan in Manas’s Bansbari-Mathanguri forest.