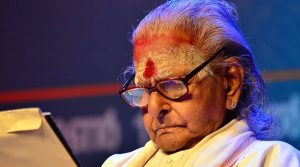 Guru Chemancheri Kunhiraman Nair, a recipient of Padma Shri, died at the age of 104.