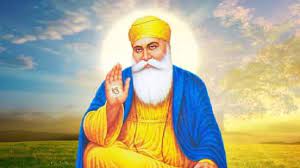 The 553rd birth anniversary of Guru Nanak Dev was celebrated.