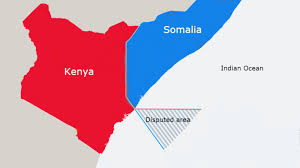 Kenya has declined to take part in proceedings of the International Court of Justice (ICJ) over its maritime border dispute with neighbouring Somalia.