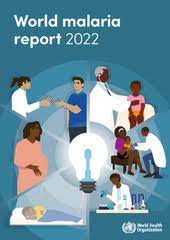 The World Malaria Report 2022 was released by the World Health Organization (WHO).