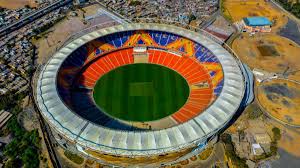 The President of India, Ram Nath Kovind, has inaugurated the world’s largest Stadium at Motera, in Gujarat on February 24, 2021.