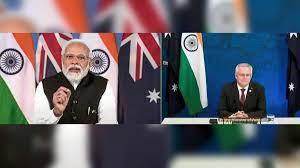 Prime Minister Narendra Modi and Prime Minister of Australia Scott Morrison held the 2nd India-Australia Virtual Summit during which they reviewed the multi-faceted relationship between the two countries and exchanged views on regional and global developments.