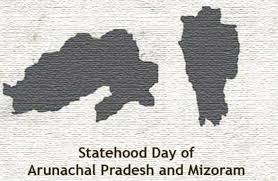 The Prime Minister of India extended his wishes to the people of Arunachal Pradesh and Mizoram on their 35th Statehood Day.