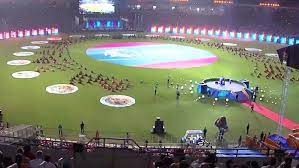 The 36th National Games was inaugurated by the Prime Minister in Gujarat.