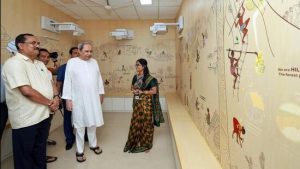 Odisha became the first state in the country to start an encyclopedia on tribal communities.