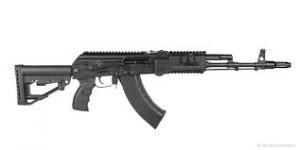 The production of the AK-203 assault rifles by the Indo-Russian joint venture at Amethi, Uttar Pradesh, is set to begin by year-end and the manufacturing equipment required for it will be dispatched from Russia shortly, according to a senior official of Kalashnikov, the Russian company which manufactures the rifles.