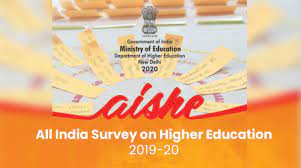 The Union Education Minister announced the release of the report of All India Survey on Higher Education (AISHE) 2019-20.