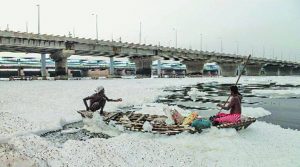 Water supply was disrupted in parts of Delhi once again when ammonia levels in the Yamuna river remained high on 16th April.