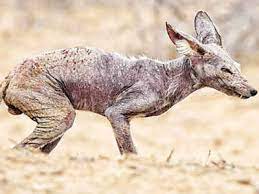 A few Desert Foxes were spotted in the scrub forests of Rajasthan’s Jaisalmer district, suffering from a loss of fur due to the Mange Skin Disease.