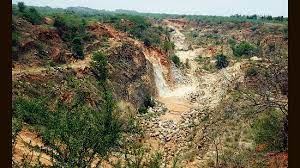 Some Environmental Activists have raised concerns over the 10,000-acre Aravali safari park Project proposed in Haryana.