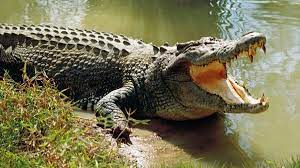 The Bhitarkanika National Park have reached a saturation point in the population of crocodile which could lead to more human-Crocodile conflict.