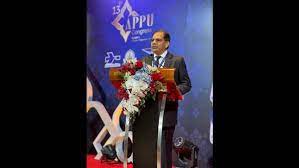 India is set to take over leadership of the Asian Pacific Postal Union after successful elections held during the 13th Congress held in Bangkok.