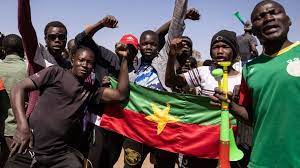 Burkina Faso’s army announced that it had ousted President Roch Kabore, suspended the constitution, dissolved the government and the national assembly, and closed the country’s borders.