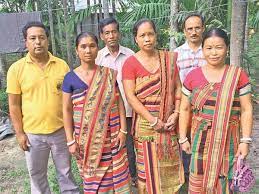 The Chakma organisations have opposed the proposed deportation of 60,000 people belonging to the Chakma and Hajong communities from Arunachal Pradesh.