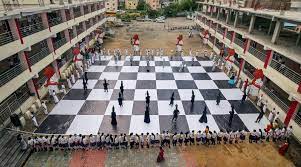 With 8 wins in a row at the Chess Olympiad 2022, Dommaraju Gukesh became the new poster boy for Indian chess.