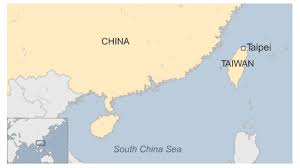 China recently flew 39 warplanes toward Taiwan in its largest such sortie of the new year, continuing a pattern that the island has answered by scrambling its own jets in response.