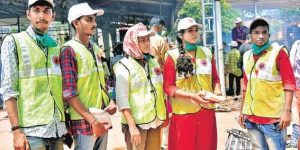 The Delhi Police recently issued a statement, pointing out that civil defence personnel, also known as Delhi Civil Defence (DCD) volunteers, have no power to stop people using police barricades and prosecute them for violation of Covid-19 appropriate behaviour such as not wearing masks.

According to the Civil Defence Act, 1968, civil defence is defined as any measure “not amounting to actual combat, that protects persons, property and places in India from hostile attack”.