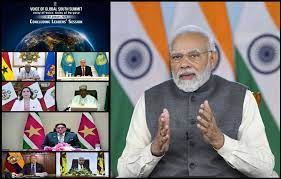 At the concluding session of the virtual Voice of Global South Summit, India unveiled initiatives to assist the Global South in areas ranging from technology to health

The concept of Global North and Global South is used to describe a grouping of countries along socio-economic and political characteristics. The Global South is a term often used to identify regions within Latin America, Asia, Africa, and Oceania.