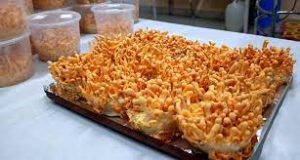 Assam’s Bodoland University is part of collaborative research on fungus-powered biosynthesised nanogold particles that has received an international patent from Germany.