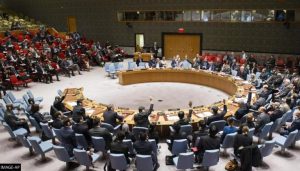 India will chair the Counter-Terrorism Committee of United Nations Security Council (UNSC) in January 2022 after 10 years.