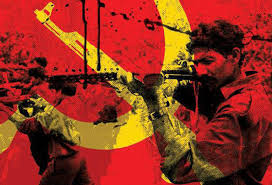 During question hour in Lok Sabha, the Ministry of Home Affairs provided data related to left extremism in India.