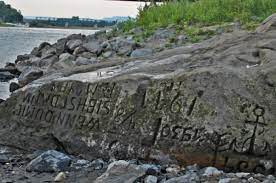 Europe was suffering from the worst drought, therefore rivers have dried up and there is the emergence of Hunger Stones.