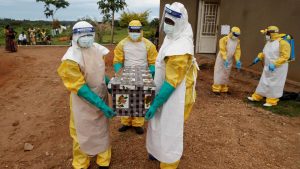 An Ebola outbreak in Guinea that started in February, infecting 16 people and killing 12, has been declared over by WHO.