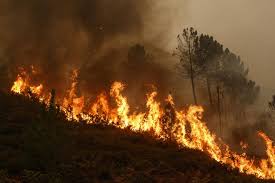 The Forest Survey of India (FSI) has released a report on forest fires in the country.