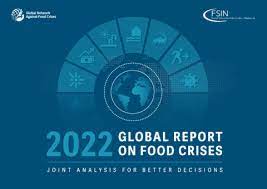 An annual report named Global Report on Food Crises 2022 was launched by the Global Network Against Food Crises (GNAFC).