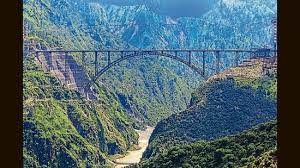 The ‘Golden Joint’ of Chenab Railway bridge was inaugurated on August 13, 2022. It was decked with the National flag to celebrate the “Azadi ka Amrit Mahotsav”.

About the Chenab Rail Bridge: