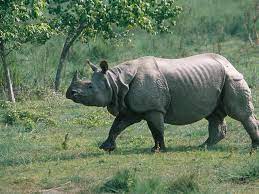 A case of poaching of the world-famous one-horned rhino has been suspected inside the Kaziranga National Park in Assam.