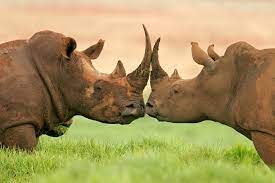 World Rhino Day is observed on 22th September to spread awareness for all five species of rhino and work being done to save them.