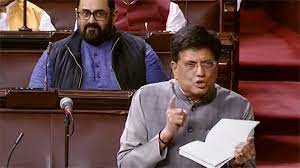 The Union Government tabled the Jan Vishwas (Amendment of Provisions) Bill, 2022 in Parliament.