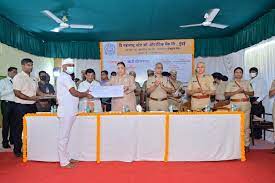 It is a loan scheme for inmates serving sentences in jails launched by the Maharashtra Department of Prisons.