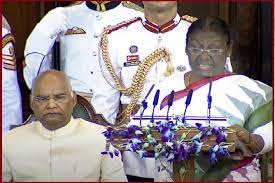 The 15th President of India, Droupadi Murmu, assumed office with a ‘Johar’ greeting to the country.