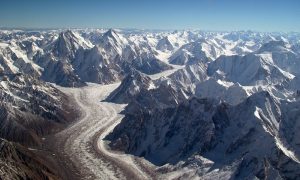 A study investigated why glaciers in the Karakoram Range of Central-South Asia have not been as affected by Climate Change as others.