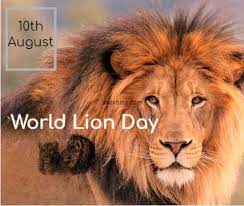 The Prime Minister, Shri Narendra Modi has greeted all those passionate about lion conservation on World Lion Day (August 10).