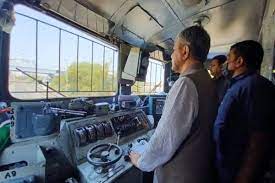 The Indian Railways tested ‘Kavach’-Automatic Train Protection System by making two trains move towards each other at full speed.