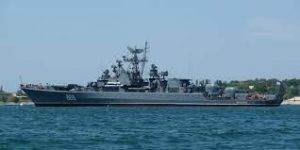 The Vice-Chief of the Naval Staff has inaugurated the construction of the second frigate of the Krivak or Talwar class.