Largest Exporter Of Gherkins In The World: India 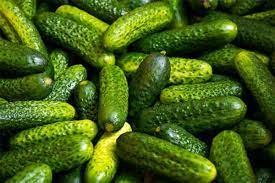 India has emerged as the largest exporter of gherkins in the world.