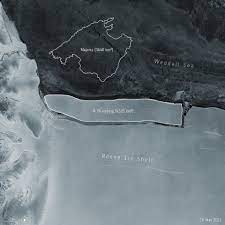 A giant slab of ice bigger than the Spanish island of Majorca has sheared off from the frozen edge of Antarctica into the Weddell Sea, becoming the largest iceberg currently afloat in the world, the European Space Agency said.